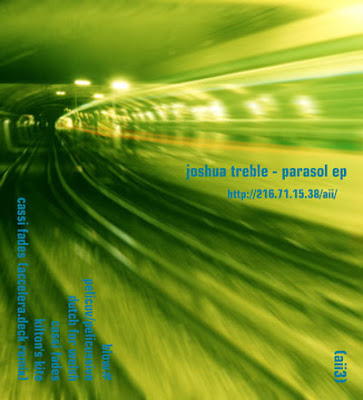 In the late 90's I bought my first Accelera Deck record from someone I
would eventually befriend and ultimately betray and soon afterwards I
met Chris Jeely. We stared an mp3/cdr label called aii.fm which also
the web address and is of course now defunct. Our first releases were
my first music as Joshua Treble with the Parasol EP and Chris as Saint13.

Ten years ago usually seems better, I cut out pictures of Matt Elliot
with teased hair and scotch taped them to my bedroom wall alongside
xerox's of Perry Farrell, Skinny Puppy, Alex Patterson, and was
surrounded by Musik Aus Strom, Skam, Wurlizter Jukebox, Sun Ra,
and Disco Inferno records and there was no place I would have rather
been than New Orleans- so every chance I could get I was driving
down I-95 on my way there.

My friend Tony Papin, whom I've never met, (and seems to be my own
personal Richey Edwards} contributed photography, my mom scissors,
my dad a walking Clint Eastwood, Grant was relentless with sampling,
and the Richard D. James Album and The Third Eye Foundation's
Ghost lp were the most amazing records I had ever heard. Hmmm...
and today I did yoga.